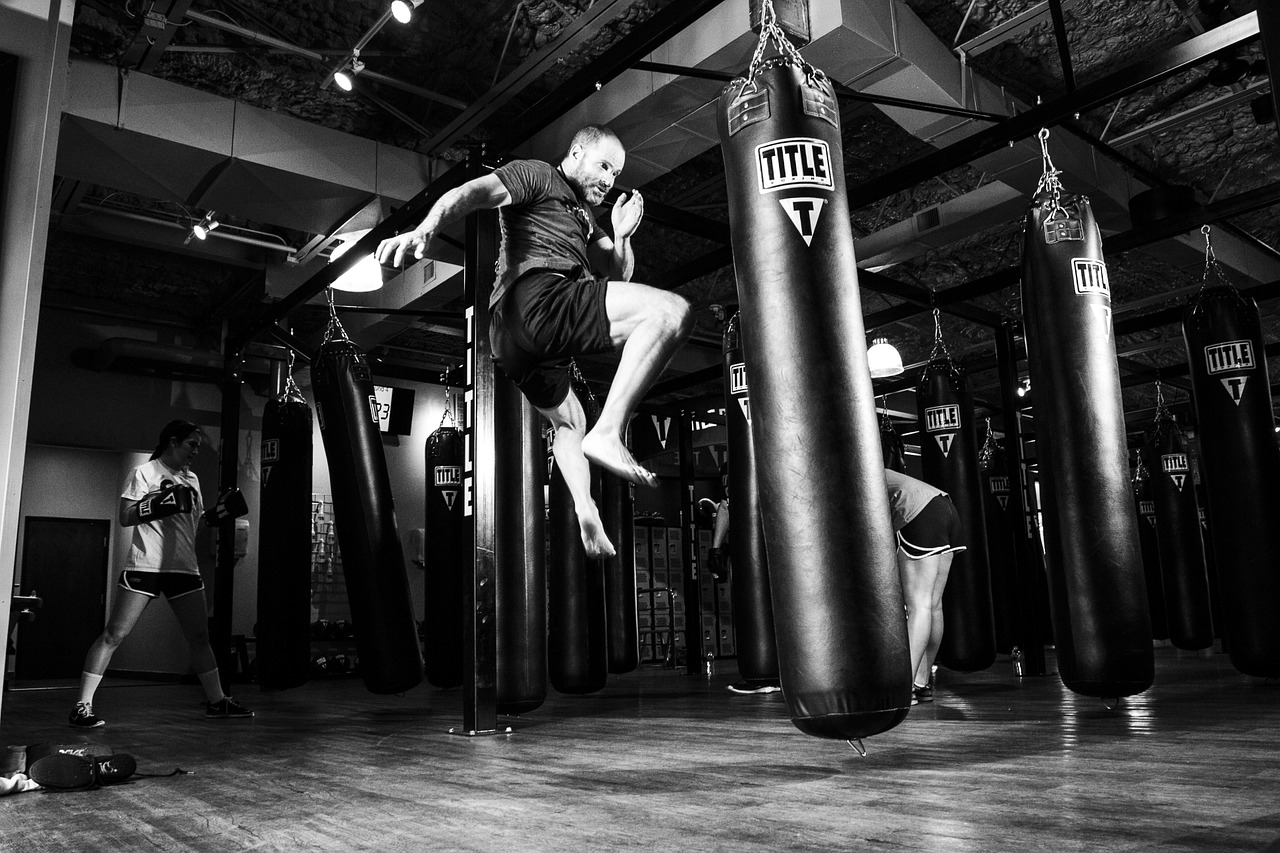 Being able to respond effectively and defend yourself during an attack can mean the difference between escaping unharmed and serious injury or death. While many people think brute strength and knowing how to fight will save your life, it is actually training your body to function during the stress and shock of a sudden, violent encounter that is most important.

Because attacks happen so quickly, it’s difficult to predict which self-defense techniques are needed before the attack actually happens. It is because of this that Krav Maga Worldwide training utilizes the body’s natural reaction to being attacked to teach people to defend against common chokes, grabs, and strikes, as well as more serious threats involving weapons.

If you are training on a consistent basis you will cultivate a self-defense skill set — a “tool box” if you will — that will help you prepare for self-defense situations. The following are self-defense techniques that Krav Maga Worldwide recommends as essential for people to have in their personal survival tool box. 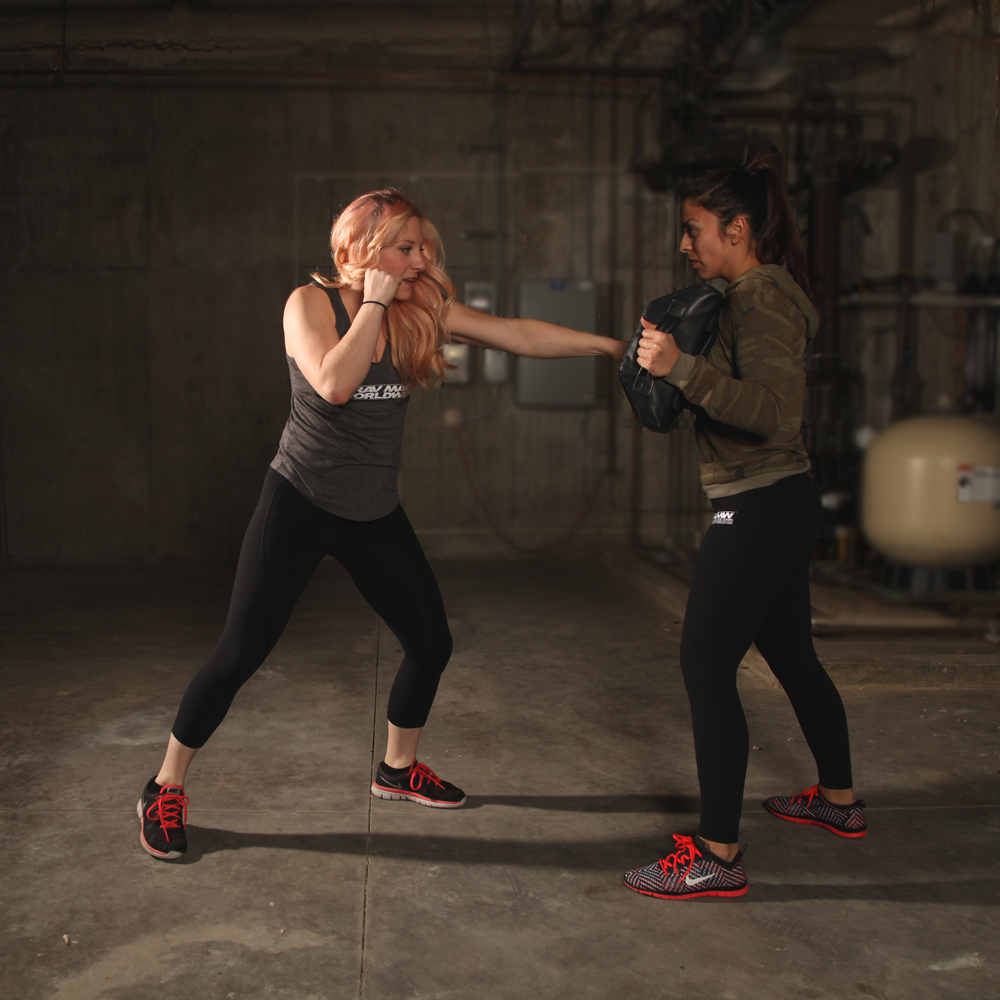 The basic movement behind a straight punch is to push off from your legs, rotate your hips and shoulders, and extend your arm out toward your target as explosively as possible.

Clench your fist tightly and aim to make contact with the two knuckles at the base of your pointer and middle fingers against your attacker’s chin, mouth, or nose.

Front Kick to the Groin 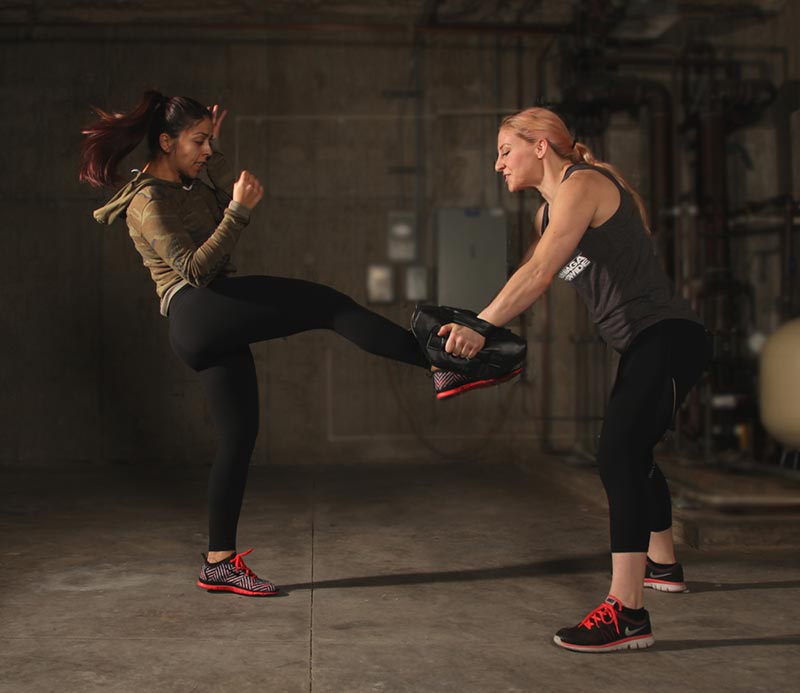 The front kick to the groin travels on a vertical plane up the “A frame” form of an attacker’s legs and lower body.

To deliver the kick, drive your hips forward with your knee bent so your heel is back. Let your knee and leg extend and, with your foot flat (shoelaces up and toes forward gives the most striking surface), kick up and through the attacker’s groin.

Imagine your kick will travel through the attacker’s groin and out the top of the head as if you were going to split them in two from the groin up. Recoil your leg back to its original position. 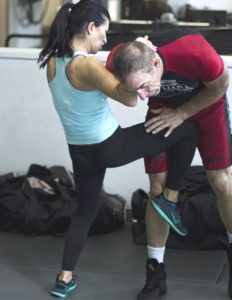 Knee strikes are among the most useful self-defense techniques for creating damage at close range. If the attacker is close enough to grab you, that means you can grab that attacker and start making damage using your knees.

Grab as much skin, muscle (and whatever fabric the attacker is wearing) at the attacker’s trapezius (that’s the spot between the neck and shoulder) as possible. Keep the elbow of the arm grabbing the trap pointed down so you can brace yourself if the attacker comes forward.

Use your other hand to wrap behind the elbow on the same side of the body you are already grabbing. This grip on the trap and elbow will help you maintain a position from which to knee.

Drive your hips forward with your heel back (so your leg makes a triangle in profile view) and imagine that you are going to punch your knee straight through the attacker in front of you. Recoil your knee by bringing your foot back to the ground, and continue to deliver knees until you can get away safe. 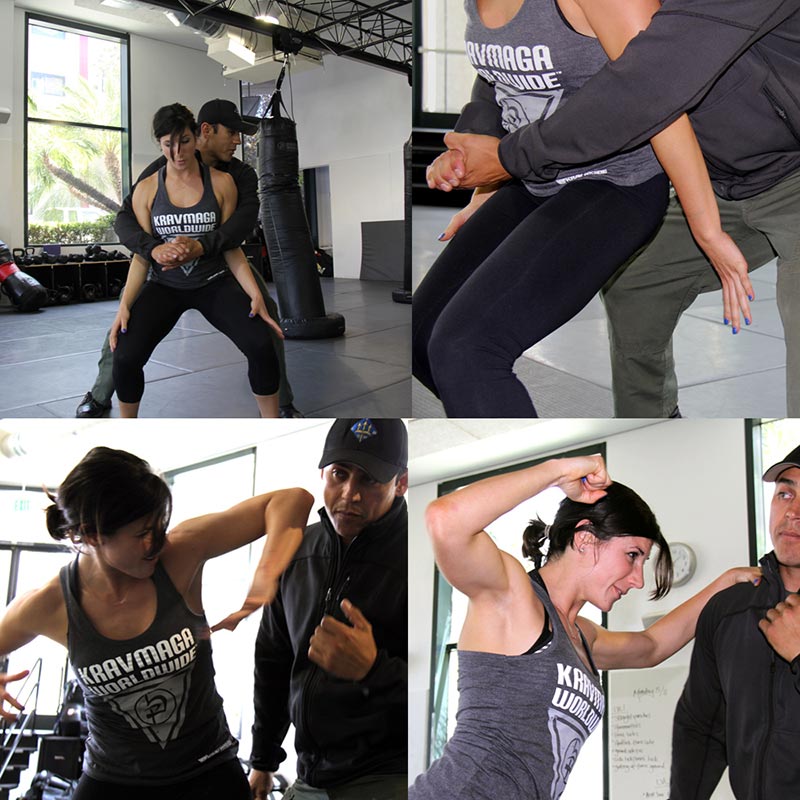 As soon as you’ve established a solid base, immediately begin striking at any open and vulnerable areas that the attacker presents. Continue to strike (head butt, knee strikes, kicks, punches, bites) until there is sufficient space for you to turn in (if attacked from behind) and continue with more strikes, or to simply separate and run away. 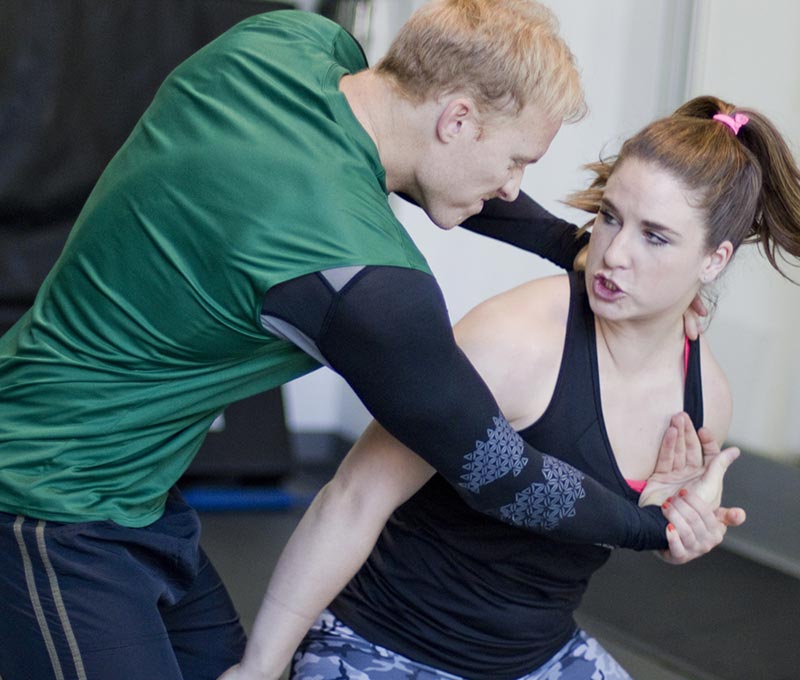 If a choke comes on from the front, back, or side and that choke happens “in place” (which is to say that you are being attacked but generally standing in the same place, not being moved or pushed while the choked) Krav Maga Worldwide experts teach to “pluck” the choker’s hands away and immediately strike back.

Your body (meaning your hands) will want to immediately go toward your neck if a choke is put on you and will most likely end up on top of the attacker’s hands as they are already on the neck. Instead of trying to pull the attacker’s hands off of the neck, which could be impossible if the defender is a much smaller person than the attacker, use your hands like hooks (thumbs against pointer fingers, hands in a “C” shape) and explosively pluck at the attacker’s thumbs.

The attacker cannot maintain a choke using their hands (it’s a different defense if the attacker is choking with their arm like a “rear naked choke” or similar) if their thumbs are plucked off of the defender’s neck. Immediately begin to strike vulnerable areas on the attacker’s body.