World's Most Painful Insect Stings, According to Science 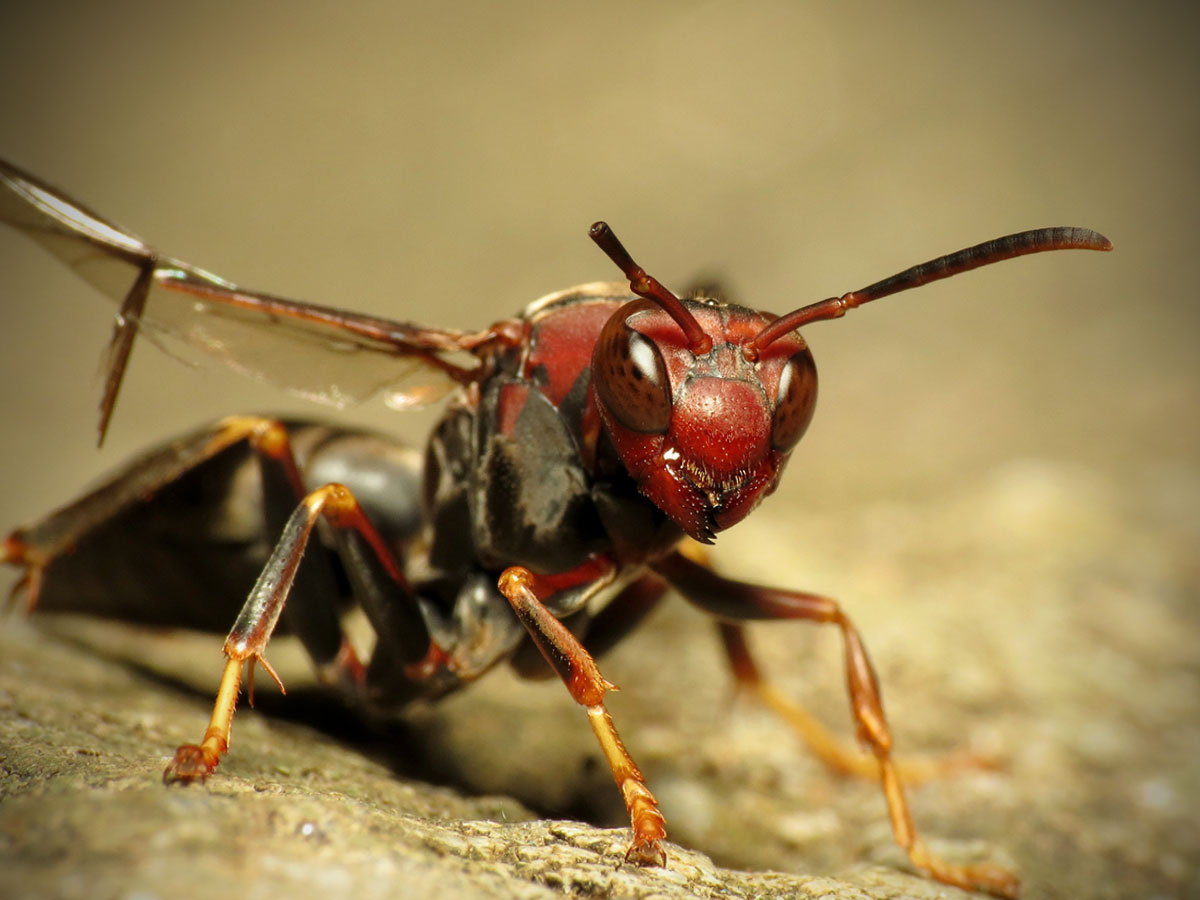 Whether on land or in the water, there’s a lot in this world that’s intent on killing you. Or, at least hurting you. In most cases, stings and bites are a result of humans acting poorly and the wildlife simply defending itself.

But, there are some insect stings so painful, it just doesn’t matter why they stung you in the first place.

Dr. Justin Schmidt is an entomologist who’s spent several decades studying the world’s most painful insect stings. Not just studying them, but quantifying and carefully detailing them. By that, we mean willingly allowing insects to sting him just to see how bad the pain is and what exactly it feels like (in “wine-tasting-esque” terms). Since the 1980s, Schmidt has cataloged almost 80 species. 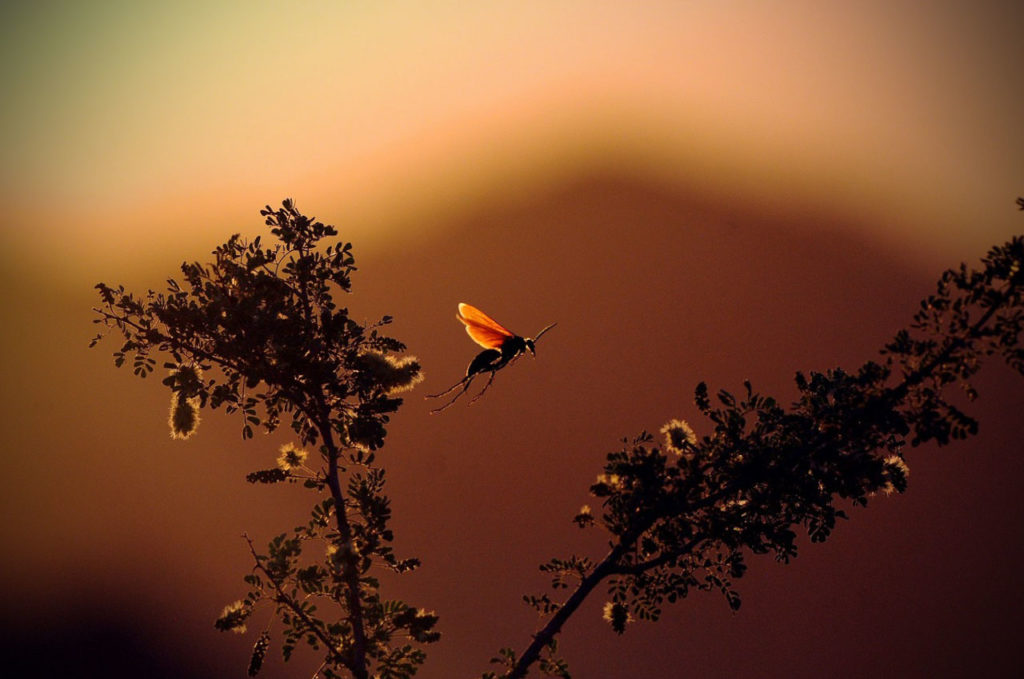 To put his findings in layman’s terms, he developed the aptly named Schmidt Sting Pain Index. It’s a simple numeric scale that ranks the most painful insect stings of hymenoptera (a specific category of insects that includes bees, ants, and wasps) from 1-4.

Here’s the full list, in case you’d like to print it out to keep in your wallet: 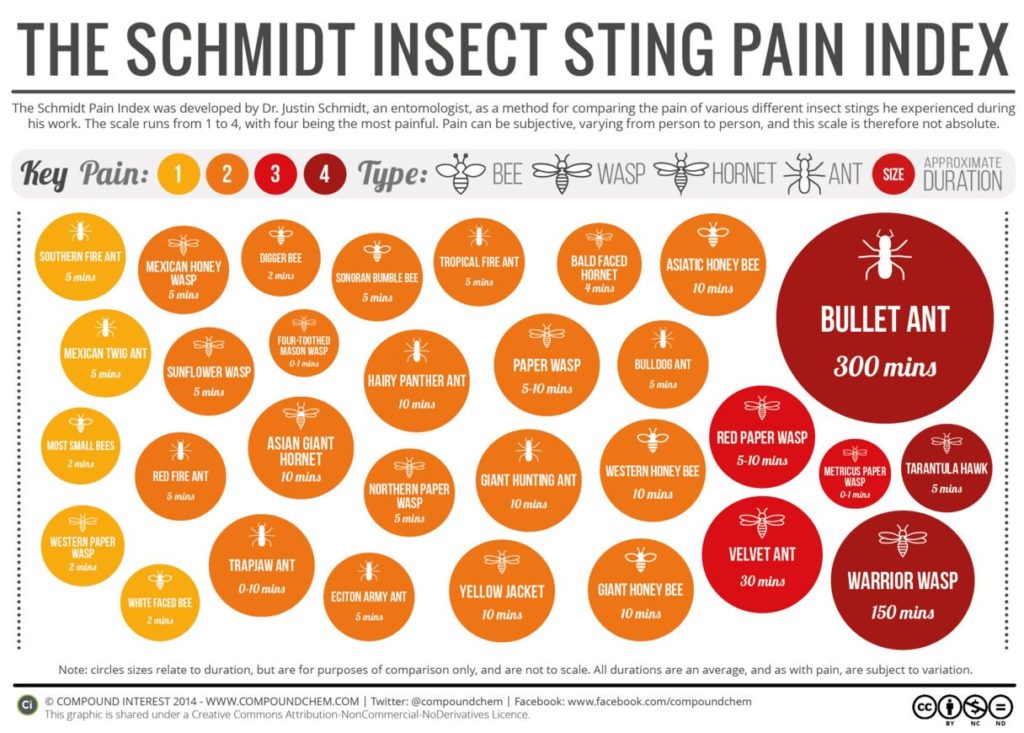 The Most Painful Insect Sting Species

Any man who’s taken a camping trip or two has likely been stung by lesser insects like yellow jackets, fire ants, and honey bees. That takes us through Level 2 on Schmidt’s scale — no surprises there.

But what kind of pain comes with a Level 3 and Level 4 insect sting? 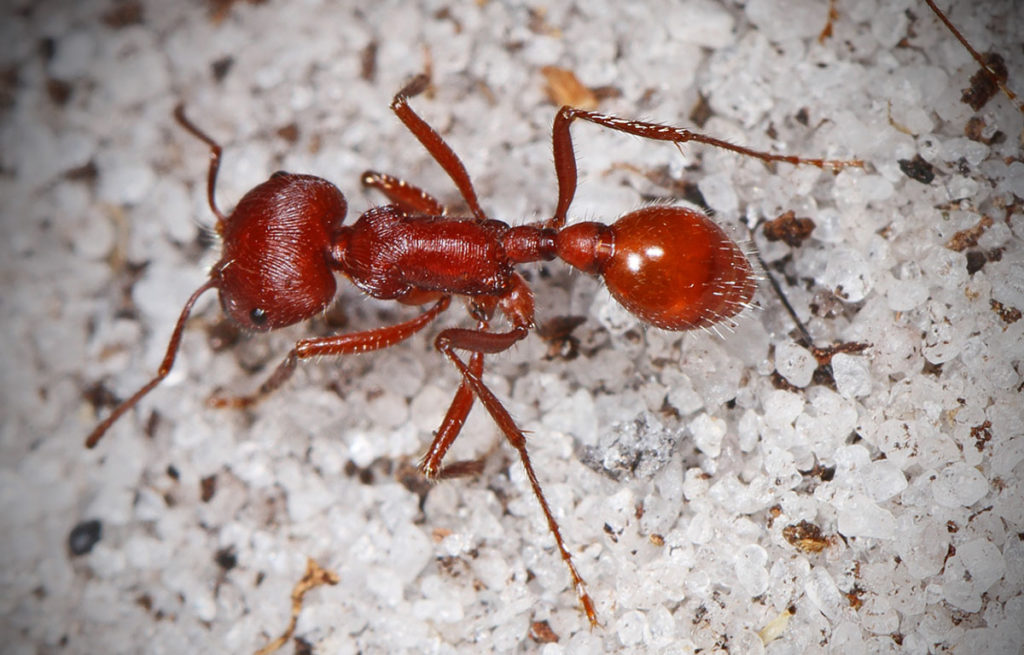 Dr. Schmidt describes the sting from a Level 3 harvester ant as “Bold and unrelenting. Somebody is using a power drill to excavate your ingrown toenail.”

Where You’ll Find Them: There are 22 species of harvester ants in the United States; Texas alone is home to seven of them.

How to Avoid Them: Their mounds are rather obvious. But, if you find a harvester ant colony in your yard, just move. The queen will likely outlast your house. 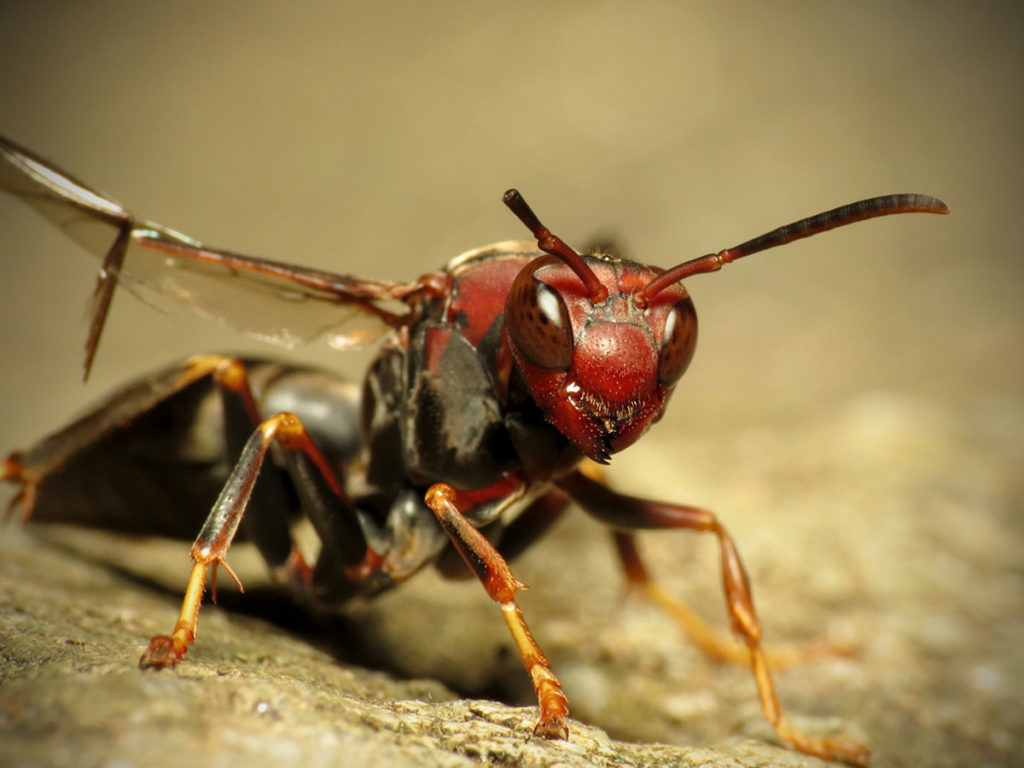 The similarly ranked Level 3 paper wasp’s sting is equally as painful but different.

In Dr. Schmidt’s words: “Caustic and burning, with a distinctly bitter aftertaste. Like spilling a beaker of hydrochloric acid on a paper cut.”

Where You’ll Find Them: Everywhere. Literally, there are more than 1,000 paper wasp species found in almost every corner of the world. North America is home to more than 20.

How to Avoid Them: Head to Antarctica — it’s the only continent where they don’t live.

“Blinding, fierce, shockingly electric. A running hair drier has just been dropped into your bubble bath.” That’s how Dr. Schmidt describes the painful sting of the tarantula hawk wasp.

There are some vivid descriptions of people getting stung by these things, and their recommendation — and this was actually in a peer-reviewed journal — was to just lie down and start screaming, because few if any people could maintain verbal and physical coordination after getting stung by one of these things. You’re likely to just run off and hurt yourself. So just lie down and start yelling.

To see the tarantula hawk wasp’s painful sting in action, check out this video:

Where You’ll Find Them: Mostly South America, where more than 250 species have been confirmed. They can also be found in Australia, Africa, Asia, India, and the Southwestern United States.

How to Avoid Them: Know that they’re most active in the heat of the day. But, as solitary creatures, it’s likely that they’ll avoid you. 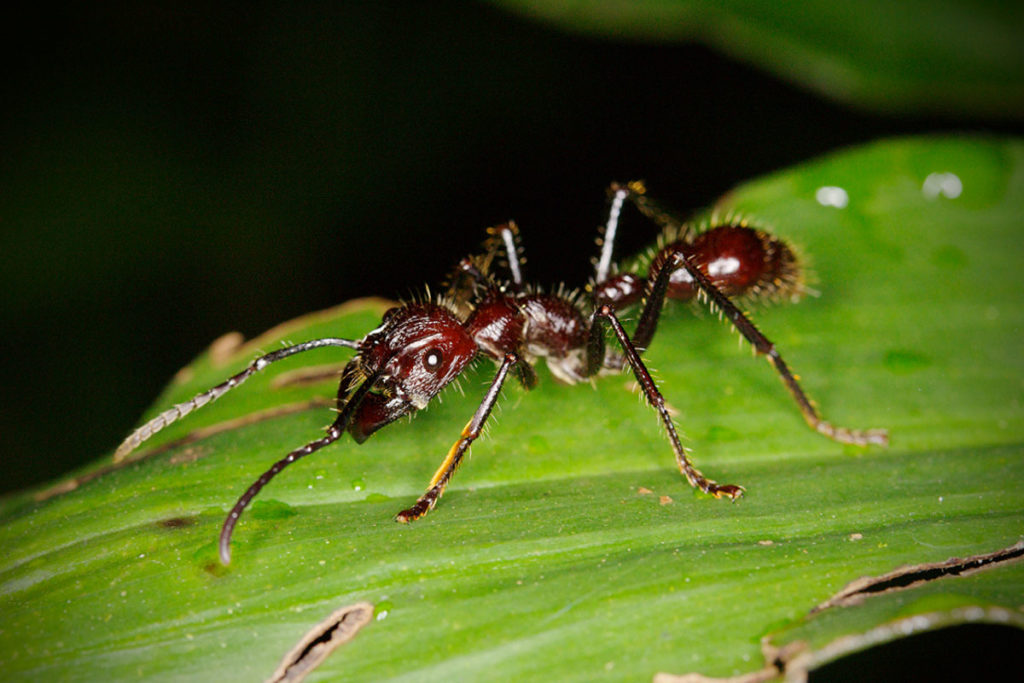 In the world of most painful insect stings, it doesn’t get any worse than the dreaded bullet ant (Paraponera clavata). The pain from its venom-filled sting is said to resemble getting shot, and it can last for up to a full 24 hours.

Schmidt describes his experience as: “Pure, intense, brilliant pain. Like walking over flaming charcoal with a three-inch nail embedded in your heel.”

Their sting is literally the stuff of legend. This Smithsonian Magazine article was widely circulated in 2014, detailing a horrific coming-of-age rite of passage for boys among the Sateré-Mawé people of the Amazon.

Their ritual, reserved only for young men, is exceptionally painful, in both a physical and psychological sense.

Boys as young as 12 years old must gather bullet ants from the forest, which are then used to make ant-ridden gloves. The young men wear the gloves 20 times for 10 minutes, performing a dance while those angry insects sting them. As National Geographic points out in its video about the ceremony, the bullet ant’s sting is supposed to be 30 times more painful than that of a bee, and each of those gloves contain dozens of ants.

The ceremony, the tribe chief says, is meant to show the men that a life lived “without suffering anything or without any kind of effort” isn’t worth anything at all.

Our friend Coyote also took it upon himself to be stung (only once) to similar effect in this wildly entertaining video:

Where You’ll Find Them: Thankfully, they’re concentrated mostly in the rainforests of Latin America (from Paraguay to Nicaragua).

How to Avoid Them: Bullet ants specifically like to nest where there’s easy access to the rainforest canopy. If you come face-to-face with one or find one on your pant leg, hold your breath. They often react aggressively — including biting and stinging — if breathed upon.

Schmidt has also studied the chemistry behind these insects and the resulting pain from their stings. Unfortunately, the bottom line in most cases is that, once you’ve been stung by something like a paper wasp, tarantula hawk wasp, or a bullet ant, there’s almost nothing you can do.

The pain is so immediate and intense that it shuts down all illusions of life as normal. Imagine sticking a finger in a 240-volt electrical socket.

There’s no insect spray, no fancy cream, no way to inoculate yourself from the pain. Just lie down, scream, and take it like a man.