How to Treat Insect Bites and Stings [Survival School]

Insects and related pests are hazards in any survival situation. They not only cause irritations, but they are often carriers of diseases that cause severe allergic reactions in some individuals. In many parts of the world, you will be exposed to serious, even fatal, diseases not encountered in the United States.

Types of Insect Bites and Stings

The best way to avoid the complications of insect bites and stings is to keep immunizations (including booster shots) up-to-date, avoid insect-infested areas, use netting and insect repellent, and wear all clothing properly.

If you get bitten or stung, do not scratch as the site might become infected. Inspect your body at least once a day to ensure there are no insects attached to you.

If you find ticks attached to your body, cover them with a substance, such as Vaseline, heavy oil, or tree sap, that will cut off their air supply. Without air, the tick releases its hold, and you can remove it. Take care to remove the whole tick. Use tweezers if you have them. Grasp the tick where the mouth parts are attached to the skin. Do not squeeze the tick’s body. Wash your hands after touching the tick. Clean the tick wound daily until healed.

How to Treat Insect Bites and Stings 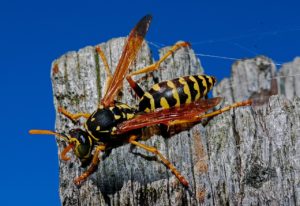 If stung by a bee, immediately remove the stinger and venom sac, if attached, by scraping with a fingernail or a knife blade. Do not squeeze or grasp the stinger or venom sac, as squeezing will force more venom into the wound. Wash the sting site thoroughly with soap and water to lessen the chance of a secondary infection.

If you know or suspect that you are allergic to insect stings, always carry an insect sting kit with you.

Relieve the itching and discomfort caused by insect bites by applying:

The black widow spider is identified by a red hourglass on its abdomen. Only the female bites and it has a neurotoxic venom. The initial pain is not severe, but severe local pain rapidly develops. The pain gradually spreads over the entire body and settles in the abdomen and legs. Abdominal cramps and progressive nausea, vomiting, and a rash may occur. Weakness, tremors, sweating, and salivation may occur. Anaphylactic reactions can occur. Symptoms begin to regress after several hours and are usually gone in a few days. Treat for shock. Be ready to perform CPR. Clean and dress the bite area to reduce the risk of infection. An antivenin is available.

The funnelweb spider is a large brown or gray spider found in Australia. The symptoms and the treatment for its bite are as for the black widow spider. 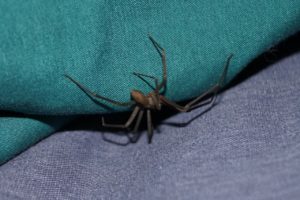 The brown house spider or brown recluse spider is a small, light brown spider identified by a dark brown violin on its back. There is no pain or so little pain, that usually a victim is not aware of the bite. Within a few hours, a painful red area with a mottled cyanotic center appears.

Necrosis does not occur in all bites, but usually, in 3 to 4 days, a star-shaped, firm area of deep purple discoloration appears at the bite site. The area turns dark and mummified in a week or two. The margins separate and the scab falls off, leaving an open ulcer. Secondary infection and regional swollen lymph glands usually become visible at this stage.

The outstanding characteristic of the brown recluse bite is an ulcer that does not heal but persists for weeks or months. In addition to the ulcer, there is often a systemic reaction that is serious and may lead to death. Reactions (fever, chills, joint pain, vomiting, and a generalized rash) occur chiefly in children or debilitated persons.

Tarantulas are large, hairy spiders found mainly in the tropics. Most do not inject venom, but some South American species do. They have large fangs. If bitten, pain and bleeding are certain, and infection is likely. Treat a tarantula bite as for any open wound, and try to prevent infection. If symptoms of poisoning appear, treat as for the bite of the black widow spider. 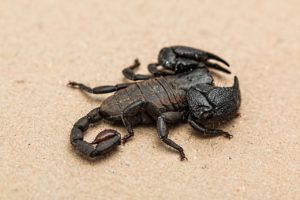 Scorpions are all poisonous to a greater or lesser degree. There are two different reactions, depending on the species:

Treat scorpion stings as you would a black widow bite.